Erdenechimeg Ish, The Secret of Mayan Calendar is Revealed (2010) www.originalmongol.mn

March 27, 2010, Kin 248 Yellow Magnetic Star, Solar Moon 21, 4 Seed year commences the 1000 day countdown to 2012. These one thousand days will be momentous like no other 1000 days in the entirety of the present historical cycle of civilization. People often wonder what then, after 21 December 2012?

For the Foundation for the Law of Time, 2012 marks the completion of the preliminary stage of its mission. Since its founding in the year 2000, the purpose of the FLT has been to pace the biosphere-noosphere transition through the diffusion of the 13 Moon 28-day calendar, the 13 Moon Calendar Change Peace Plan, and the promotion of the Law of Time. This was to assure that by 2013, a small but critical minority of humans would already have accepted and be operating by the 13 Moon harmonic standard, while being fortified by an ample knowledge of the workings of the synchronic order and the Law of Time.

However, by July 26 2013, there will be no more Gregorian calendar and the 13:20 timing frequency of universal synchronization will have supplanted altogether the 12:60 timing frequency which had dominated the global civilization much of the past 5000 years. Humanity will at last be liberated from the tyranny of an irrational calendar and the mechanical clock. The linearity of time will be no more. The human mind will be operating freely within the parameters of the 13:20 timing frequency with no real past and no real future, only increasing cycles of synchronization.

The date 7.26 2013 will be commemorated as representing frequencies of the Law of Time, signifying: a) the creative power of 7 and the 26, one half of a 52 year cycle and the fractal of 260, and also the first day of the 26th year of the first Sirius 52-year cycle (see below); while b) 2013 will be observed as the moment of conscious triumph of 20 and 13, the two numbers that control the universe combining to establish the 13;20 timing frequency – hence Timeship Earth 2013.

It Is truly hard to imagine the scope of liberation in store for the human mind in switching from a linear/mechanistic and irregular concept of time to an experience of time that is radically cyclical, fractal and non-linear. Instead of centuries and millennia marching relentlessly forward from some hypothetical moment in a mind-created past, there will ever-recurring 52-year cycles of perfect harmonic order wheeling through the timespace of a great cosmic expanse that has no beginning or end. It is this vision that characterizes the second stage of the mission of the Foundation for the Law of Time.

During the period between 12/21 2012 and 7/26 2013, the Foundation will promote the formation of numerous bioregional calendar councils to assist in the transition so that by the galactic synchronization (2013) the 13 Moon 28-day calendar will be in use everywhere.

The first Sirius cycle began 7.26 1987, Kin 34 White Galactic Wizard, and the second will commence exactly 52 years later. The date N.S.1.51.13.28 (New Sirius Cycle 1, year 51, day 364) will be followed by the Day Out of Time, (year 51, day 365, 52 years complete—year 2039 old count). Then will commence N.S.2.0.1.1 Kin 34, White Galactic Wizard (New Sirius Cycle 2, year 0, Magnetic Moon 1).“Galactic Wizard” is the name of the recurring cyclic order of Timeship Earth 2013, establishing a perception of galactic timelessness. In adjusting to this new measure of time, the human mind will unloose tremendous amounts of hitherto repressed psychic energy to be channeled into the establishment of telepathic technologies and the focused collective effort of transforming Earth into a work of art.

It is interesting that recent decodings of the hieroglyphs at Palenque, which are understood to have been made during the reign of Pacal the Great, refer to dates beyond the end of the Long Count calendar. On the Tablet of the Inscriptions at Palenque a date of 1.0.0.0.0.8 5 Lamat 1 Mol can be inferred – otherwise known as 21 October 4772, almost 3000 years in the future. Perhaps we can deduce from this that Pacal himself believed that the end of the fifth age did not represent the end of time or of the Earth, and that his name would be still mentioned in the sixth age.

Even more profoundly is the fact that this 20 baktun inscription demonstrates the complete power of the numbers 13 and 20 with the occulted interval of 7: 13 baktuns, encompass the great cycle of history, but 7 baktuns more define the great cycle of the sixth sun of the noosphere. 20 is the Mayan number of totality – meaning that the conclusion of 20 baktuns will mark a complete cycle of totality of the planet Earth – from the unconscious 13-baktun cycle of history, to the cosmic conscious 7-baktun cycle of the noosphere.

If 5125 years of operating by inharmonious and mechanistic standards of time produced the disaster of global civilization, what will 2760 years of operating by harmonic cycles of synchronization produce? Will this not be the true golden age of an enlightened humanity at one with the cosmos, at home and forever free on Timeship Earth 2013?

With this positive vision of the time beyond 2012, the Foundation for the Law of Time is calling once again for all people and organizations of good will and good faith to unite as one collective force during the Harmonic Convergence of 2012, so that the old cycle may end in peace and on a positive note, assuring the swift and harmonious transition into the new cycle of unified human consciousness.

May this expanded vision of the purpose of the Foundation for the Law of Time uplift and unite the hearts and minds of human beings everywhere!

Welcome to the Spect... 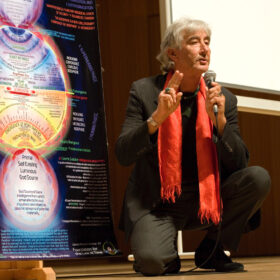